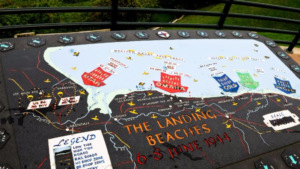 The invasion of Normandy—D-Day—was the largest military operation in the history of the world. On June 6, 1944, more than 160,000 U.S. military personnel, 13,000 aircraft, and 5,000 ships stormed more than 50 miles of beach. General Dwight D. Eisenhower said, “We will accept nothing less than full victory.” And it was one of the greatest victories in military history. But it required massive preparation and involved many challenges—just like your career.

I can hear you now. “Just what does planning for D-Day have to do with my career?” I’ll tell you. Planning and coordinating were of paramount importance to the D-Day invasion. The U.S. and Allied forces took painstaking steps to increase their chances of success. Did you know they took their time over several years to invent the floating bridges for the tanks and vehicles to drive ashore? They spent money and effort to train combat soldiers from all branches of service.

But most people do a very poor job of career planning. In fact, 90% don’t have a three-year career plan. You know what they say about failing to plan equals planning to fail. You need to invest time in planning your career and where you want to go. Determine:

One of the biggest similarities between planning D-Day and planning your career is the risks involved. There are so many unknowns. With the invasion of Normandy, unpredictable weather was a huge concern. They had to consider seasonal influences, and the timing of high and low tides. And so was the timing: When exactly should they launch? How could they make certain the airplanes carrying paratroopers would arrive at the same time as the ground forces—on different beaches? Would they actually succeed?

You face risks, too. Career paths can often be unpredictable. The average tenure for a particular job is three years. And the average professional holds 14 jobs, with three to four career changes. Factors such as a new boss, a company merger or acquisition, and future industry changes are similar to the ever-changing weather and sea on D-Day. There may be times when you need to reevaluate your plan, embrace the unknown by changing jobs or even changing industries. Leave room in your career plan for flexibility, so you can take action when the time seems right.

Of course, there are differences between a massive military operation and your career. In the grand scheme of things, your career is a much smaller venture. It won’t likely shape history or change the world. But life-changing evens may redirect your career path at times, and you’ll need to put these changes in perspective. If you’re laid off or even fired, it may seem as if your world’s been destroyed. I’m not trying to belittle your disappointment or dismay; but the fact is, such circumstances are more like diverging paths, not dead ends. At Mulling Corporation, we consult with people every day who are devastated by the unexpected. But you can’t quit. You must continue even when things look bleak. With a well thought out career plan, you can minimize the power of setbacks and get back on track.

The invasion of Normandy was huge turning point in World War II. As Allied soldiers began the trek across Europe to defeat Hitler’s troops, it was the beginning of the end of war in Europe. A well-planned and executed career change can also be an important turning point in your career. Just as failure on D-Day would have been catastrophic to the Allied forces, a bad career change can be catastrophic to your career. But if you’ve put time and thought into a career plan, then you’ll minimize your risk of making a bad move.

Can you imagine the fear our young men had sitting on the carriers as they were about to run out and take the beaches? Can you imagine the stress General Eisenhower experienced while delaying the launch of D-Day because of the ever-changing conditions of June 6, 1944? He knew the plan was solid yet flexible enough for contingencies. He kept his head to make the best decision.

We should have the same strength when it comes to our careers. Do NOT be afraid of change. Fear can paralyze you, preventing you from taking the necessary risks. To be successful, you must have a career plan – three years at a minimum. You also need to know your long-term goals so you can make short-term adjustments in your career. Only then can you effectively manage the ever-changing organizational, economic, and industry up and downs you’ll face in your working life.

Next month, we’ll continue to explore career lessons we can learn from D-Day by considering how to analyze your career and learn from your successes and failures.

At Mulling Corporation, we can make a positive difference for your organization and your career. For 31 years, we’ve created and developed talent management solutions for a dynamic workforce. To learn more about how we do what we do, visit our website at mulling.com. And for pertinent topics on workplace issues, tune in to Newstalk 1160 on Mondays at 1 PM for Mulling at Work, where Emory Mulling talks with thought leaders in executive coaching, HR, and the corporate workplace.